Category Archives: In the Beginning

So What’s Next? Part I

I’ve been thinking a lot about life. The universe. Everything. Towels. Towels that get you high. Towels that hitch you rides on spaceships. But I digress. I’ve mostly been thinking about what to scribble on this awesome blank page that is my life. Other than curse words and PENIS because, you know, I might still be 12.

I fired up the electronics brain again, and also fired up the dye pots and dyed a metric fuck-ton of yarn for Stitches West. So what’s up? Is it yarn? Is it engineering? For the love of Bob, what is it going to be?!?! As far as I can see it (and some days I can’t even see across my backyard), the plan is this. Yes. Yes is the plan. Doing things that I feel positive about, am excited about, doing things that I’m learning about. Because I’ve figured out that I’m kind of a learning junkie. If I’m not developing some new skill, or challenging my brain in some way, I get really bored and dissatisfied. That’s not to say that I don’t enjoy some solid repetition of things that I’ve learned to do well. I do! But constant repetition with nothing new kills me. I need variety.

Take yarn. Yarn is squooshy. Yarn is colorful! We make cool, three-dimensional things that we can put on our bodies – and lo! might even be functional! – out of yarn! Yarn is great. But as I was dyeing the metric fuck-ton, I remembered what I didn’t like about yarn. I didn’t like dyeing the same colors over and over. And I found that I tended to gravitate to the same palette again and again -the colors that I knew would sell, the colors that were predictable, the colors that were easy to make, the colors that I knew I wouldn’t screw up. They’re   delightful colors – I love almost every single one of them – but I felt like I was on a treadmill. With natural dyes especially, there are so many things you can try, so many variables. Every time I dyed a batch, I would think of a dozen other questions I had, experiments I wanted to do, things I wanted to explore. What if I used a different acid? What if I used a different reducing agent? What if I used a different species of plant? What if I used more of this and less of that? But the metric fuck-ton and Stitches West wait for no dyer. No time, just makes the pretty colors that you know will turn out well. Even then, there are guaranteed to be surprises that will completely muck with your schedule. 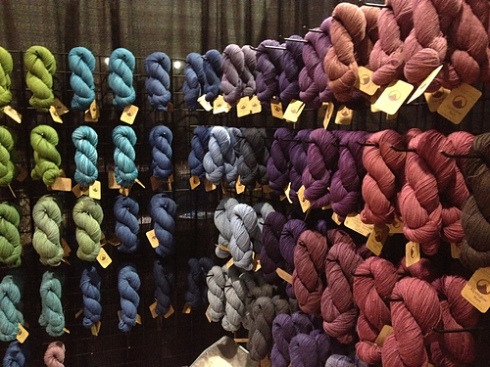 I also learned something else – it was super fun to share the process of how I dye with people. If you haven’t already read it, I wrote a series of posts in the Stitches West Vendors Thread about each dye I used. The preparation, the boiling, the straining, and the yarn-coloring. The response to my posts, especially in person, was amazing. Far beyond what I had even hoped for in a tiny little corner in the back of my brain. So many of you came up to me and thanked me for sharing, it was just really sweet and completely made all the effort totally worth it. Thank each and every one of you so, so much. (And to the lady who works for Facebook who was interested in putting together a class but didn’t have a business card – info at alpenglowyarn eagerly awaits your email. Dorking out with other engineers about dyeing is totally my idea of a good time.)

I want to do more of these things. More sharing, more exploration. So I’ve made the decision to stop the production dyeing, and morph into something a little different. Clubs. That’s right, CLUBS. The c-word, the thing that has made several people fake their own death on the internet because it was just too much. Clubs. The cool thing is that I’ll have the opportunity to do a different exploration and theme with each one. To maximize the number of colors without making it stupidly expensive, each club would be a series of mini-skeins. So you would get 100 yds of 8 or 12 different colors that would all work together. You’d also get an article with each one, with a detailed account of how each color was made. Maybe sometimes, you’d even get mordanted yarn and some raw dyestuffs so you can try it at home. Sound like fun? Let’s see, which one of these should I do first? Tell me at the end of this post!

Anyway, these are the ideas that fly off the keyboard in just a few minutes. I have tons more. You could spend your entire life experimenting with and coming up with processes for natural dyeing. People do!  I could. The fact is, I’m not exactly going to. I’m thinking of only doing 2-3 Alpenglow clubs per year, and 2-3 collaboration clubs with other dyers or businesses. Wait a minute, do you know about Among Friends? It’s an amazing group that I’m thrilled to have recently contributed to (and hope to again!). It’s run by the fantastic women behind Knitted Wit, Sincere Sheep, and Spark!, and the whole idea is to put together themed kits from a few different dyers and designers each time. With awesome, really cool, side-goodies. Go sign up for one now. I promise you will not regret it!

Where was I? Right. Spending less time on yarn. And more time on??? Electronics, duh! I think I’ve already rambled enough for one post, electronics is a whole ‘nuther topic worthy of its own post. And I totally promise that I will not be George RR Martin and make you wait for 5 years for Part II. (TV series coming soon! Now with EVEN MORE BOOBS!)