The SkeinMinder and Economies of Scale

There are 5 days left on the SkeinMinder Kickstarter campaign, and a few people have whispered this question in my ear: What if it doesn’t fund?  No need to whisper or wonder, let’s flat-out talk about the big white elephant.

Let’s back up a little and first ask, “Why is the goal of the campaign to sell 100 SkeinMinders and not 20 or 30?”  It comes down to a simple manufacturing principle – economies of scale.  As the quantity of something you build goes up, the per unit cost of building it goes down.  Dyers should already be familiar with this concept, since hand-dyeing is manufacturing.  It may be small-batch pretty manufacturing, but the same principles apply.  Both parts cost and labor cost goes down when you increase your batch size.

Let’s look at parts cost first.  I’ve priced out the parts for the SkeinMinder at several different build qtys, below is a graph of these. 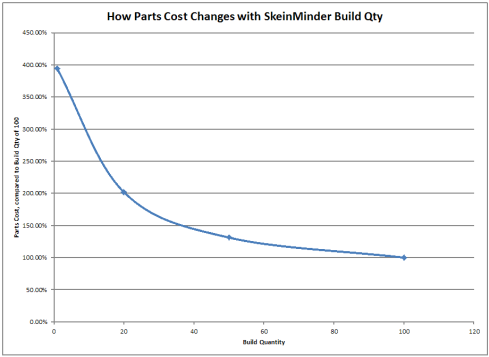 The cost is normalized (compared to) a build quantity of 100.  Since I based SkeinMinder pricing off of the 100-build cost, I’m calling it the normal, 100% parts cost.  The parts cost for building 20 SkeinMinders is 200%, or 2X the cost of building 100.  The parts cost for building a single SkeinMinder is 400%, or 4X the cost for 100.  Dyers see this a little bit – buying 10 pounds of yarn is cheaper per pound than buying 1 pound.  Dye cost decreases when you buy larger qtys.  The reason that the curve for the SkeinMinder (and electronics manufacturing in general) is so steep is that there are over 100 parts in the SkeinMinder.  Some of the parts are also custom made, and quantity really has a huge impact on those because specialized human labor is involved.

Which brings us to labor costs.  This should be more familiar for dyers.  You have to do the same tasks whether you’re dyeing 1 skein of yarn or 10 skeins.  You still have to heat up water, you still have to mix (or extract) your dye, you still have to wash the yarn and dry it.  Doing this for 10 skeins may take 2-3 times as long as doing this for 1, but it doesn’t take 10 times as long.  Therefore, your cost of labor per skein goes down.  For the SkeinMinder, I estimate that it’ll take about twice as long to make 100 as it will to make 20.  So my per unit labor cost for making 20 is 2.5X the per unit cost for making 100.

With 2.5X labor cost and 2X parts cost, it should be pretty obvious that the SkeinMinder will also have a different viable sale price depending on if it’s manufactured in a batch of 20 or a batch of 100.  In order to keep the final SkeinMinder sale price as low as I could ($365), I based it off the 100 qty cost.  This is why I also had to make the campaign goal selling 100.  (Note: the actual campaign total is slightly more complicated because there are non-SkeinMinder yarn rewards as well, which all have additional costs.  Plus Kickstarter fees and shipping counts toward the total, so those have to be factored in as well.)  If I set the campaign goal lower and met it but only sold 20 SkeinMinders, I’d be in trouble.  They’d be much more expensive to build, and I’d end up losing money.

Which of course brings up another question, “Couldn’t you build 100 now anyway, and sell the rest of them later?”  This is a topic that dyers should also be familiar with – the significant cost of holding inventory (aka – another way to lose money).  If it funded at a lower goal, I’d likely have just enough money to fulfill the non-SkeinMinder rewards plus (hopefully) buy parts for 100.  But then I wouldn’t be compensated at all for my labor.  I’d still be spending time buying parts, scheduling everything, and managing vendors.  I’d still have to spend time assembling SkeinMinders.  Sure, I could delay assembly until I’ve actually sold the remainder, but guess what?  Remember that 2.5X labor cost for assembling batches of 20 vs 100?  Yep, I’ve just increased my unit cost by assembling them in smaller batches.

So the case of building 100 when I haven’t sold 100 turns into a big cashflow problem.  All the money I raised would be tied up in inventory, and I wouldn’t be compensated for my labor until the rest sold.  Which, judging from the campaign, might take 3-5 years for all 100.  Dyers who retail should understand the cost of inventory on a deep personal level, because the following scenario has probably happened to all of us at some point.  You have a show coming up in 2 months.  You spend money up front buying yarn and dyes.  You spend 2 months dyeing yarn for the show full-time.  You have auxiliary expenses of show fees, advertising, etc.  Then you go to the show and…..you don’t sell nearly as much as you thought you would.  You’ve covered your show expenses and parts cost, but don’t have enough left over to compensate yourself for your 2 months of labor preparing for the show.  Which means you have to find some other way of paying your rent and groceries for those months, and your money is tied up in your leftover yarn until it sells.  So you’re a bit stuck cash-wise.

Basically, the point of the Kickstarter campaign is to avoid the above scenario.  Sales happen up-front, which funds the cost of parts, and the labor for the time it takes to make them.  The number of sales is a known quantity, so I avoid guessing and making too many, then being stuck with a bunch of inventory and not able to pay myself.  So it brings us back to the original question – what happens if the Kickstarter doesn’t fund?  Is it just not economically viable and no more SkeinMinders will ever be made?  Is there no hope for winding efficiency and tools for hand dyers????

Don’t worry, the show will go on.  It’ll just be a slightly different show.  If the campaign doesn’t fund, it proves that the market isn’t big enough to support a run of 100 SkeinMinders.  There’s still a market, and I’m happy to say that the people who want a SkeinMinder (or another SkeinMinder) are quite vehement in their demand, but it’s smaller.  So I’ll have to make them in smaller batches, which means that I’ll have to increase the price.

I’m working on pricing now, and even though my costs for making 20 will be over 2X what they are for making 100, the final price won’t be 2X.  I just don’t think that would be viable from a customer perspective.  I’m looking at margins, and figuring out a price and a way to build them that will be economically neutral.  Meaning that my time will be fairly compensated, but there won’t be enough margin to make it a self-sustaining manufacturing line (there won’t be enough profit to buy parts for the next batch and keep a continuous production cycle going).  It’ll likely be a build-to-order product with about a 3 month lead time.  I’ll take a deposit up-front in order to split the financial risk between me and the customer.  If I charged the full amount up front, the customer is fronting the entire cost and trusting me to deliver.  (Which of course I will, but it’s not guaranteed from the customer’s perspective.)  If I waited until just prior to shipping to charge anything, I’d have to front the entire cost and trust the customer to not change their mind.  A 50-50 split allows me to at least cover the parts cost up front, and it commits the customer without putting the entire burden on them.  I’d handle orders through my own website, not another crowdfunding campaign.

Ok, cool.  So why should you still bother to back the Kickstarter?  From my perspective, it gives me a much clearer idea of the demand, so that I can price it for the right batch size.  I can’t guarantee that everyone who backs at $365 will necessarily back at a higher price, but it’s a really good starting point.  Also, I super appreciate everyone who was willing to commit to the Kickstarter.  If you end up ordering a SkeinMinder from me directly, I’ll see if I can do a small discount, and I’ll at least throw in free shipping.

From your perspective, if you want a SkeinMinder, you can’t lose by backing the campaign.  Kickstarter is all-or-nothing, so if it doesn’t reach the funding goal, you won’t be charged.  Nothing happens, you keep your money.  If you still decide to buy a SkeinMinder at the higher price, you’ll be able to order one through my website.  And hey, if Kickstarter does actually fund – awesome!  You’ve helped to make it happen (seriously, backers attract more backers!) and you get a SkeinMinder at a lower price than you otherwise would.

To all my backers – thank you so much for your support.  Even if it doesn’t fund, it’s definitely been a worthwhile experience.  And I know more now than I did 40 days ago, which is always valuable.  :)   Now to write a few more emails because it ain’t over til it’s over.