Community in the Yarn Biz

Disclaimer: The opinions here are mine and mine alone and I do not represent any of the companies mentioned in the below article.

The word “community” and what it means regarding yarn businesses has been on my mind lately. And yes, I’ve been thinking about it because of the recent controversy regarding Brooklyn Tweed’s debut of Ranch 01, which is extremely similar to Range, a yarn A Verb for Keeping Warm has been making and selling for several years. I’ve been watching mostly from the sidelines with profound disquiet and unease, because in the past, I too have created lines of small batch yarn. I’ve put in the time to connect directly with farmers, gotten sweaty and greasy and shitty (literally) on shearing days, and researched and eventually worked with a few different USA mills. I’m keenly aware of how much time, money, and effort goes into that process, and how hard-won and costly it was to develop the connections and experience to actually deliver a unique end product. 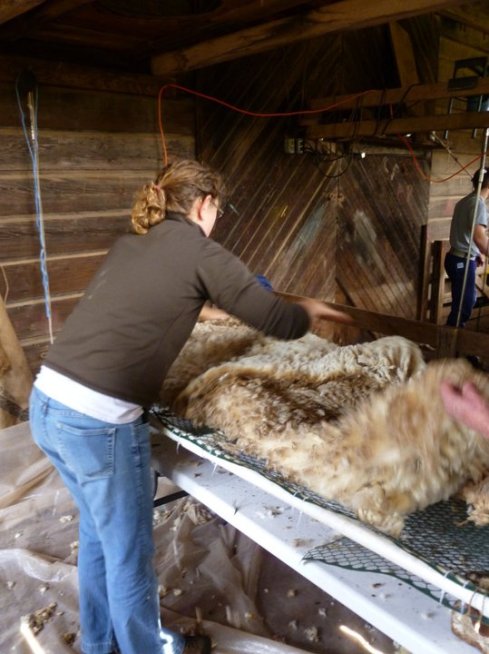 So when I see a popular well-capitalized yarn company come out with a line of yarn that is (at best) highly derivative of a smaller company’s product, and then rally their base with warm fuzzy claims of being such a caring part of the yarn community, well, my eyebrows go up and my hackles rise.

Let me just make clear up front – I don’t really care if Brooklyn Tweed intended to copy Verb’s product or not and ruminating about it is pretty much a waste of time. Intent doesn’t change their or Verb’s yarns, and publishing a timeline doesn’t actually communicate anything decisive about intent, despite BT’s claims that it somehow does. A timeline is just a calendar of events. But something they’ve neglected to spell out in their timeline is quite interesting and worth noting. An excerpt of their post:

Two of those three “industry and business associates” were Kristine of A Verb for Keeping Warm, and Brooke of Sincere Sheep. I believe the third was Emily of Local Color. I wasn’t on these calls and it’s not my intention to speak for these women or their businesses. All I know and what BT has said above, is that the process of naturally dyeing a large run of yarn (yes, it’s small batch for yarn manufacturing but a large batch for a natural dyer) was discussed.

There are a few important points here. Brooklyn Tweed might be an experienced company in terms of pattern releases and photography, but they were the new guys in terms of both natural dyeing and making small batch single-origin yarn. They reached out to Verb and Sincere Sheep, members of the yarn business community who had extensive experience in both of these fields, expressed that they wished to learn more, and asked them for information and advice. Then a year later, the popular n00bs come out with a yarn that directly competes with one of the businesses whose advice they asked in the first place (and who, btw, is also a stockist for their other yarns).

That was a dick move.

You might shrug and say “oh, that’s just business!” but the fact remains, it’s not how a vocally self-proclaimed upstanding cooperative member of a beloved small community acts. This is how a predatory and exploitative business acts. They call you or arrange for a friendly meeting, and hey, they’re a big name in the yarn world and maybe there’s a possibility of some collaboration in the future, so you take the call or meeting. You tell them about your own business philosophy and thoughts on natural dyeing, what the timeline and process is like, and you help educate them. You do this for free because it’s a really small community – and natural dyeing especially is tiny – and helping other like-minded businesses is how we all do better collectively. And then a year later, the other shoe drops, and you find out that your good intentions were totally taken advantage of. At worst, you were copied, at best, your “fellow community members” didn’t bother to think that differentiating themselves from your existing product (from the same fiber source) was important. Then they have the audacity to claim “Our fiber community is at its best in an environment of support and trust. Inciting division, competition and rivalry has never been, and will never be, an intention held by the members of the Brooklyn Tweed team. Such an intention functions in direct opposition to our definition of success…”

My fear, and why I’ve gone to the effort of writing this damned treatise, is that nothing about Brooklyn Tweed’s business practices is going to change, and more dyers and businesses who have a smaller audience but have been legitimately active in the yarn business community much longer, are going to similarly be taken advantage of. In fact, small things are already happening. If you’re familiar with Sincere Sheep, have heard her talk about her yarn, been reading her newsletters, or just been following her for a while, you’ll know she talks about her yarn and natural dyes in terms of “terroir.” She lives in Napa, and has specifically talked about the relationship between terroir in wine and terroir in farming and dyeing in her printed and online copy for years. Here’s an excerpt from her website:

“Now, still located in the wine-growing region of Napa, CA, Sincere Sheep continues to be inspired and guided by the concept of terroir. Both wool and natural dyes are agricultural products that depend upon and reflect their environment. Factors during the annual growing cycle such as water, grass, weather and stewardship all impact the quality of the wool clip and plant harvest. You will see the effects in the subtle variation of colors and textures of yarn from year to year.”

Though the concept certainly flows, making the direct parallel to wine and specifically using the word “terroir” wasn’t something I had heard other companies use, oh wait, until Brooklyn Tweed came out with this description of natural dyeing in their blog post profiling Green Matters(the company they ended up using to dye Ranch):

“Natural dyeing captures the beautiful irregularities of nature itself — just as wine imparts the flavors of terroir along with the native characteristics of the grape and the artistry of the winemaker, plants yield different colors depending on soil, weather, and other environmental factors. The dye strikes the wool more strongly here, more gently there, to produce rich tonal variations.”

They wrote this about a year after their meeting with Brooke, in which she did in fact talk about her philosophy of dyeing and how it relates to terroir. Before this copy came out and before Ranch was released, she had still been in occasional communication with Brooklyn Tweed, during which they mentioned they’re considering producing a Cormo yarn. Brooke, in conjunction with Jeane deCoster of Elemental Affects, has been producing a few lines of small-batch domestic Cormo yarns for several years. She and Jeane have been slowly bootstrapping the endeavor, buying more fleece every year, raising awareness of the yarn to their customers, working with designers to release more patterns with it. They’ve put large amounts of time, effort, and money into the endeavor, and have created a wonderful and unique product. And Brooklyn Tweed is now specifically asking her about sources, and one of the partners in the company has purchased a skein of at least one of her Cormo yarns.

Spoiler Alert: don’t be surprised if next year, we’re having this same discussion about a new Ranch 02 Cormo yarn that’s exceedingly similar to one of Sincere Sheep’s and is also naturally dyed.

To wrap this all up – what’s really my point here? I’m trying to say that we – you, me, anyone who buys yarn or sells yarn or works with yarn – get to have a voice in what we want our yarn community to be. Do we want to welcome companies who are exploitative, and don’t hesitate to seek advice from their peers, yet don’t seem to care enough to bother differentiating their products from those same peers? Do we want to support companies who talk a good talk and take pretty pictures, but whose actions don’t support their words? I think it’s worth taking the time to consider these things. For me, I much prefer to support businesses who are highly collaborative, work to support others in their community, and offer truly unique products.